Courage Can Have an Impact for Generations

Editor’s note: One way GM Financial recognizes Black History Month is by sharing stories from the perspective of our team members. For more examples, visit our Diversity, Equity and Inclusion page.

Thomas J. Simon’s family was proud of him when he completed the ninth grade in Cary, Mississippi. But in 1940s Mississippi, that was as far as the public school system allowed this ambitious young Black man to go.

The decisions he made next not only shaped his future, but also inspired generations to come. 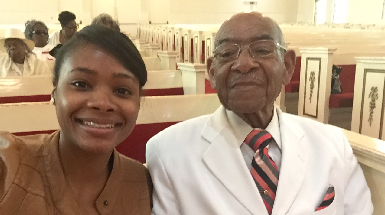 “My godfather, Thomas, is the most influential person in my life,” said Michaela Bradshaw, Customer Experience Strategic Programs Manager at GM Financial. “I’ve been blessed by his intelligence, discernment and calculated risk-taking.”

As he was finishing school, Thomas heard from a young sailor that the U.S. Navy accepted all men — including Black men. Although Black service members were not allowed to operate guns, he learned that he could enter as a shoe shiner or a cook. Joining the military went against his father’s wishes, but Thomas knew that it would be better than picking cotton and his mind was made up.

“The military exposed him to the world,” Michaela said. “It also spared him from the lynching culture of the South, gave him access to higher education and created a path for financial freedom.”

History can light the path for today

Thomas grew up during many of the country’s most significant historical events — from the Great Depression and World War II to the discrimination of the Jim Crow era and the civil rights movement that followed.

Michaela knows that we often have to look to the past to see the way forward and that the challenges of our ancestors can help put into perspective the hurdles we face today.

“What inspires me most is how he didn’t allow the barriers to his education or the oppression of his environment to force him into the status quo career for Black people in the South — impoverished sharecropper,” she said. “Instead, he created his own path that led him out of the South and into success.”

As she thinks about it, Michaela believes her own adventure studying abroad in Spain comes from Thomas’ influence.

“I didn’t know anyone who was studying abroad,” she said. “I had never left the country before. Nobody in my sphere had studied abroad, so it was a nerve-wracking decision. But I wanted it.”

Sounds a bit like her godfather’s decision to join the Navy those many years before. Thomas retired from military and civil service some 30 years ago and now resides in California. 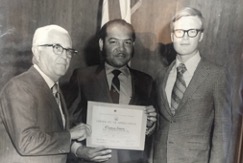 Her father wasn’t too keen on the idea of her going abroad, fearing for his daughter’s safety. But Thomas was enthusiastic, sharing with her all the places he had seen during his service. “He just inspired me with his stories.”

She said that experience was a “catalyst” for her life.

“A global mindset is a real thing. Knowledge that the way you do things and the way you think is not the way to do things or to think. It’s just one way. That four months challenged a lot of things that I never had really thought about before.”

“Everything we do is about equipping people with the tools, resources and information to accomplish goals — whether it’s career goals, financial goals, networking goals. That’s something that really attracted me to this role.”

When asked how her heritage has influenced who she is as a professional, Michaela smiled and shared the mantra Thomas instilled in her: Think for yourself.

“Those are the words that remind me to make my own decisions, accept the consequences and champion the changes that move me toward my goals,” she said. “Positive disruption can cause a ripple of discomfort, but that’s often the first sign of progress.”

From cars and movies to great works of literature, Lori Tutt has a passion for the classics. She’s never claimed to be good with numbers but can readily find the right words to describe money matters like budgets, investments and understanding credit. And when she’s stressed, she turns it around with desserts (or clever wordplay).

Language is constantly evolving, and lately faster than ever. Here is guidance for those who want to learn more about how to incorporate inclusivity into their day-to-day lives.

On Jan. 19 and Jan. 21, GM Financial teamed up with the Congressional Black Caucus Foundation to give 30 interns a digital KEYS Financial Empowerment series presentation.